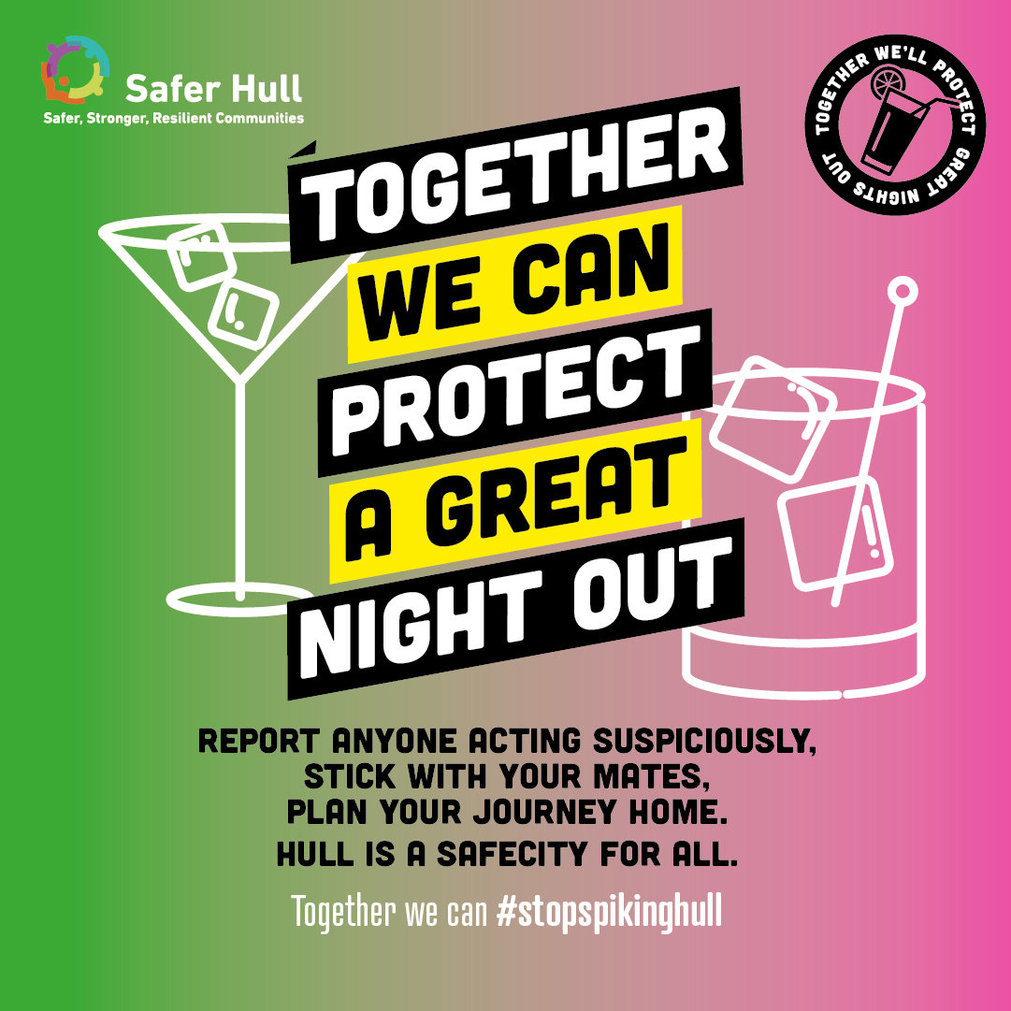 A new campaign aims to raise awareness, educate and protect people from the issue of spiking in Hull.

Stop Spiking Hull will involve a number of measures, including distribution of preventative measures and working with venues in the city on a pledge focused on maintaining safe drinking environments.

Multiple venues have been invited to sign the pledge ahead of the official launch of the campaign on Friday 10 December. The campaign will also use preventative and detection methods to help people identify if they (or others) are at risk, educate on how to report instances of suspected spiking and encourage people to seek help, if needed.

The campaign is commissioned by Safer Hull and funded by Hull City Council, Humberside Police and the office of the police and crime commissioner for Humberside. As a multi-agency partnership, Safer Hull has worked in collaboration with relevant services to ensure the campaign is visible city-wide for maximum impact.

Mark Charlton, Head of Community Safety and Partnerships at Safer Hull, said: “Hull is a vibrant city and we’re proud of the range of cultural events that take place, its hospitality offering and the mix of venues to attend - both in and out of the city centre.

“During the festive period, we want to encourage people to visit all venues knowing that they will be safe and with the reassurance that we, as a city, take everybody’s safety seriously.

“By working together, with Humberside Police and our other key partners, we can protect safe nights out in Hull and work to ensure we provide safe drinking environments for everyone.”

Safer Hull has worked hand in hand with HullBID and local venues as part of the campaign. This includes distribution of 5,000 drink testing kits, 100,000 drinks covers and 10,000 Spikeys (a versatile drink protector) to venues located in the city centre and surrounding areas. These measures will be stocked at various venues, and can be used by bar staff or requested by anyone in the venue who may want to use them.

The campaign will deliver core information through posters, which will also be distributed to venues, and through media screens located in the city centre.

Social media will be used to reach the target audience, which will also be sent as an asset pack to venues and other partners to use on their own channels.

Messages include information about the preventative measures available to customers, encouraging everyone to look out for one another, how to report spiking and how to get help for anyone they suspect may have been spiked. It also highlights that spiking is illegal and will not be tolerated.

Multiple venues have been invited to sign up to a collaborative Stop Spiking pledge, which recognises that spiking lies with the perpetrator, and pledges to take all manageable steps to maintain safe drinking environments for everyone.

Over 14 venues have signed up so far, with sign-ups expected to increase throughout the duration of the campaign.

Councillor Aneesa Akbar, Portfolio holder for Community Safety, said: “Spiking is a horrific crime and the impact of it can be detrimental, which is why this campaign and a collaborative approach across the city to stamp it out is so important.

“We understand that the action of spiking lies with the perpetrator and not the victim, and I am proud of the work Safer Hull, and all partners involved, are doing to protect all people from harm and provide support where it is needed.

“Hull is a safe city and everyone deserves to feel safe on a night out. By working together, looking out for your mates and following the guidance, we can all help to protect great nights out over the Christmas period and beyond.”

The campaign is in response to a reported increase in incidents of spiking in the Humberside area, including by injection. In October, Humberside Police reported that October accounted for around 45 per cent of 2021’s reports of spiking. They also reported that two thirds of those spiked since January 2021 were women, while the remaining third of incidents involved a male victim.

Alongside the Stop Spiking Hull campaign, there are a number of measures already in operation that aim to ensure a safe night out in Hull:

Taxi marshals – the Taxi Marshal scheme has received further council funding. Marshals will be present at three key taxi ranks, including the Paragon Interchange, to ensure those waiting can access a taxi and remain safe whilst waiting.

Hull Street Angels – as part of the campaign, the street angel volunteers have been provided with testing kits and drink protectors. They will continue to marshal in the city centre until 2am, offering support and guidance in any way that is needed.

Ask for Angela – a nationwide scheme that is operational in many venues across the city. In venues the scheme is running, those who feel uncomfortable or that something isn’t quite right can ask a member of staff for 'Angela' - which acts as a request for help.