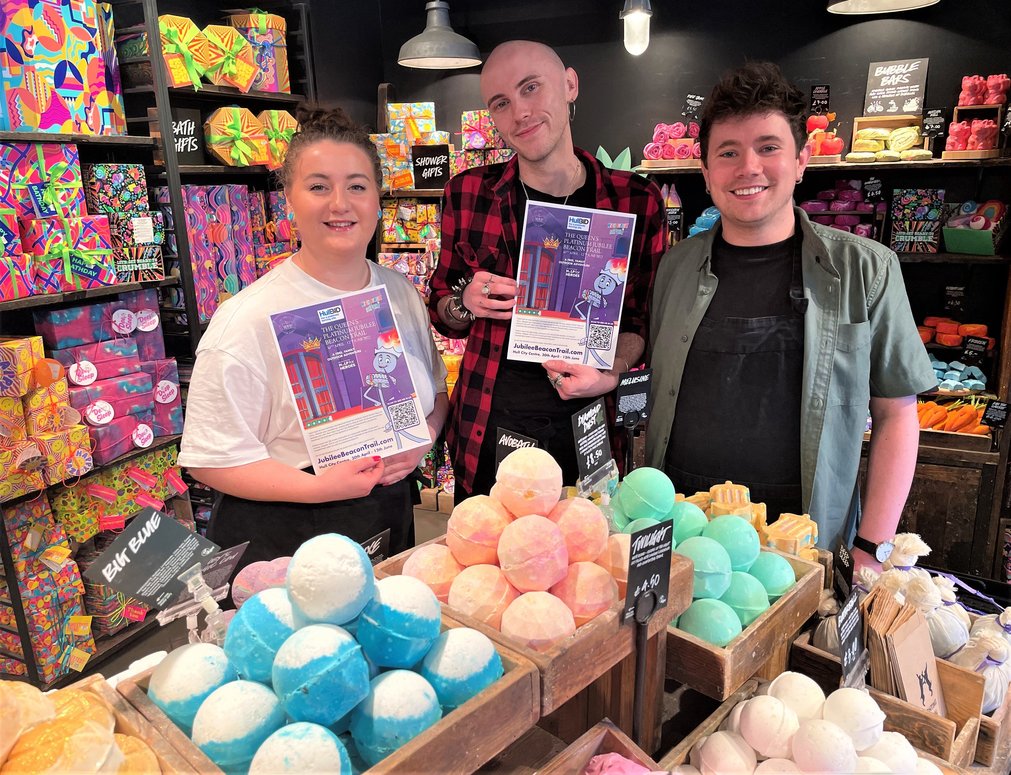 City centre businesses have teamed up for the launch of a new fun family trail linked to The Queen’s Platinum Jubilee.

Seven outlets are taking part in the Queen’s Platinum Jubilee Beacon Trail which tells the story of Her Majesty’s 70 years on the throne.

The trail, which is free of charge, runs from Saturday 30 April until Sunday 12 June and begins with the scenario of a little girl praying to have a brother because that would mean she wouldn’t have to be Queen.

It continues with facts about The Queen’s reign from the 1950s right up to the present day where two of the augmented reality characters from the storyline – Sir Barnaby Beacon and his friend Cherry Chandelier – are racing against time to organise the Platinum Jubilee celebrations.

Families following the trail should visit the businesses in numerical order and simply use their phones or tablets to scan the QR codes on the character window vinyls at each of the seven sites. They will then be able to open the series of augmented reality characters and even take selfies, learning more as the story unfolds.

The Queen’s Platinum Jubilee Beacon Trail has been devised by High Street Safari, which presented other crowd-pulling trails including Monster Hero Safari and Monster Villain Safari as a way of tackling social distancing regulations in 2021. The augmented reality is a new aspect for the Jubilee, bringing the characters to life.

HullBID has once again arranged the trail for Hull, and Marketing and Events Co-ordinator Catherine Goble said: “The trails were developed as a safe and family-friendly activity which encourages people to come into the city centre and have fun together as they visit the participating businesses – and hopefully others - and maybe make a day of the experience.

“That’s exactly what happened with the previous trails, and business owners reported afterwards that they experienced an increase in customer numbers as a result of their involvement. We’re delighted to be able to provide further support for businesses by bringing in The Queen’s Platinum Jubilee Beacon Trail.”

Ben Garner, Store Manager at Lush in Jameson Street, said: “We’re aware that the previous trails have helped attract people into the city centre and we’re looking forward to taking part in this one because footfall is so important.

“We’ve noticed a lot of people shopping online and we think this will encourage more people to visit, experience our shop and our products and have a good time. It’s great that people can go out and explore the city centre again.”

Lush is number one on The Queen’s Platinum Jubilee Beacon Trail. Hares & Graces in King Edward Street is number two and Milchig in Paragon Arcade is number three. From there the trail continues to story point number four at Samsara & Co in Princes Quay Shopping Centre, number five at Hull 4 Heroes in Whitefriargate and number six at Beasley’s in Hepworth Arcade. The seventh location is at GH&36 in Humber Street, and all businesses will display the official trail posters.

To find out more about The Queen’s Platinum Jubilee Beacon Trail visit https://highstreetsafari.com/locations/jubilee-hull