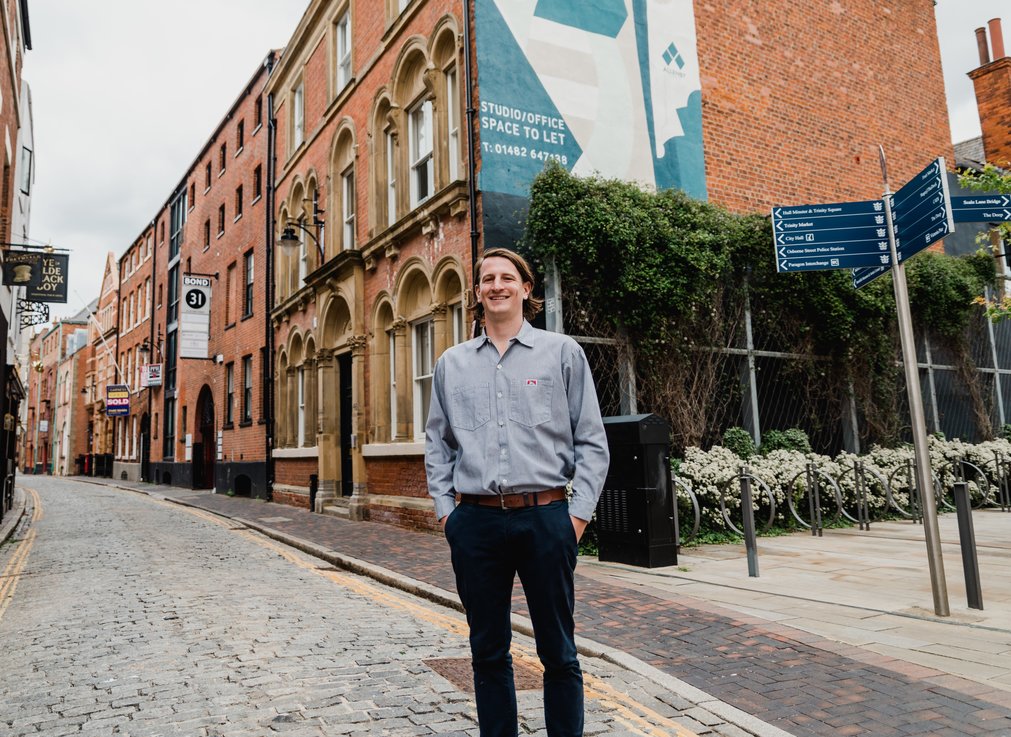 A developer which is quietly breathing new life into old buildings throughout Hull city centre has completed its most patient project with the £1.2m renovation of two historic riverside properties.

Allenby Commercial has converted Danish Buildings and the adjoining Grade II listed Bayles House into 17 studios which are being snapped up by architects, film-makers, marketing professionals, tattooists, hair stylists and others who are a perfect fit with the original brief to create new space to generate more creativity.

The two remaining units – which could be amalgamated into one – are being seen as the icing on the cake, offering a business location in the heart of Hull’s cobbled Old Town, overlooking the River Hull and the Humber beyond, and complete with Juliet balconies.

The renovation has been supported with £250,000 from the Government’s Local Growth Fund, secured by the Humber LEP as part of the Government’s commitment to the Northern Powerhouse and the investment has made all the difference.

Chair of the Humber LEP Stephen Parnaby OBE said: “We’re thrilled to see work complete on this historic Hull building, which we were pleased to support through the Local Growth Fund. Not only has it supported the regeneration of an important building in the Old Town, it has also supported the creation of new office space and enabled start-ups and existing businesses to grow their operations in a city centre location.”

Minister for Regional Growth and Local Government Simon Clarke MP said: “I am delighted that the redevelopment of Danish Buildings has now completed, creating new jobs for the people of Hull and providing a much-needed boost to the riverside while preserving the rich heritage of these historic buildings.

“The Government invested £250,000 into this important development and I am pleased to see that small businesses and new start-ups are already benefitting from being able to grow their businesses in Hull city centre.”

Charlie Allenby, Business Development Manager at Allenby Commercial, said: “The support of Humber LEP was a very significant factor in the whole project. It enabled us to carry out much more of the restoration work which has become a key feature of both buildings.”

Parts of the property date back to the 17th century. Bayles House was originally built as a house in the 18th century and underwent alterations later that century and in the mid-19th century. It was listed in 1952 and sits next to the iconic Scale Lane Bridge and the Lion & Key pub, and opposite Ye Olde Black Boy.

Allenbys began the renovation after buying the buildings from Hull City Council in 2017 and set about peeling back carpets and layers of history, exposing and then refurbishing old stone floors, restoring the original wall panels to extend their lives by another hundred years, removing plasterboard to reveal the fireplaces which have been there since construction, one in each studio.

Charlie said: “It has been a very delicate project, starting with Danish Buildings because that isn’t listed and we were able to proceed more quickly and meet the early demand for what has become a prized location.

“We then moved on to Bayles Houses which has delivered spectacular awards for the care and attention it has received. An old toilet block has been converted into an unrecognisable ‘summer house’ meeting room which the tenants love to use to impress their clients. We brought in a specialist to recreate coving which had been removed or damaged and we’ve used heritage paint products throughout.”

Modern working practices are catered for with cosy breakout areas which offer the opportunity to admire the architecture, plus a secure cycle store with shower suite.

Charlie said: “The idea was to entice creative and productive people out of their spare rooms at home and into Hull city centre, and where better than the Old Town and the cobbles of High Street to bring like-minded businesses under one roof?”

Emma Pearson-Kendall, Managing Director at Fred Marketing, said: “This is a fantastic new working space in an excellent location that we’re proud to call home. A move to these stunning new premises was perfectly timed to accommodate our growing team. It’s also a great way to showcase the city as our clients from further afield fall in love with the old town – it’s a very special place.”

Joe Sargieson of video production company JayJay Media said: “We see the Old Town, and High Street in particular, as the cultural industries quarter which people were talking about 15 years ago and which has now happened almost by stealth. We didn’t want to be on a business park, we want to feel part of the city and its heritage. This area has become a real creative hub and that’s what has drawn us in.”

With one flagship development completed, Allenbys are turning their attention to their city centre office suites at Chariot House in Hull and to their Trade Yard developments in Beverley and Scunthorpe.

Monocle, which offers 60,000 square feet of space on five floors in the former Europa House, is awaiting planning permission for another innovative Allenbys conversion.

Charlie said: “We’re busy with some amazing projects which are all about creating jobs for people in the Hull area by providing practical and interesting space for businesses. We’re thrilled with the feedback about Danish Buildings and Bayles House and while we look after those we’re making good progress at the other sites.”